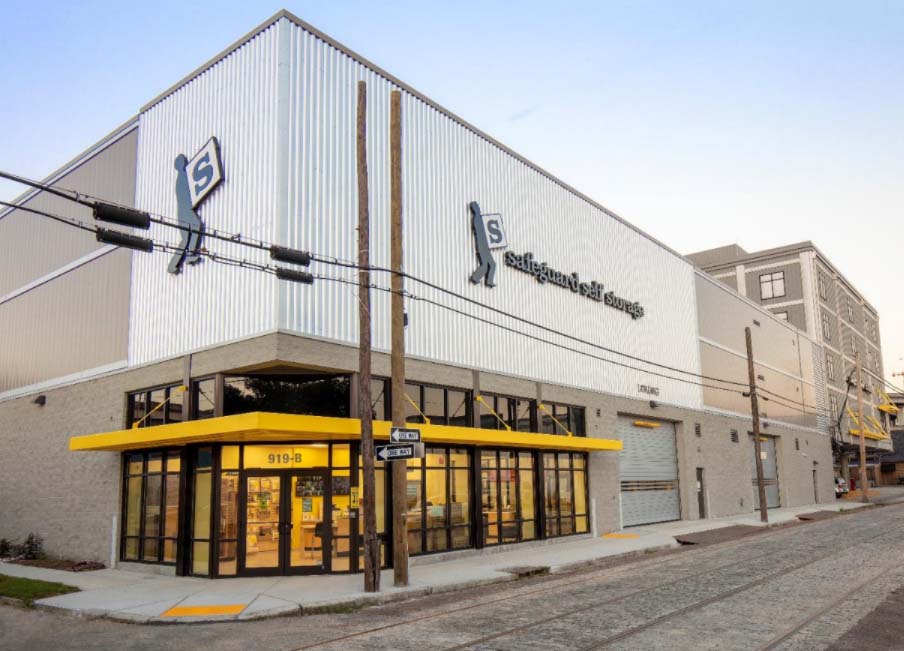 From a little more than napkin sketches, SBS Construction began working with Safeguard Storage in 2017 to construct a 3-story building, complete with an office, parking and a loading area. Beginning with design, development plans, permitting and bid docs, SBS was tasked to erect a 67,425 sf building onto a 0.847-acre site with an 18 foot ceiling height on the first-floor.

Despite the civil, environmental, regulatory, and design challenges, SBS Construction’s design-build team delivered a successful project with quality and efficiency to our respected client.

The existing buildings on the site were the home of an armored car warehouse, with three money vaults, that had to be demolished and hauled away. Safeguard hired SBS to demo the existing structures and prepare the site for construction.

During the foundation construction, it was discovered that over 60 years ago the site was a gas station and an underground fuel storage tank was found. Work had to cease and an environmental company had to come in and extract any liquid that was remaining in the tank and then fill the tank with concrete. The foundation consisted of 544 timber piles that were 45 feet long, with over 300 of the piles requiring an uplift anchor to tie into the pile caps & grade beam.

Although the site did not flood during hurricane Katrina in 2005, the City of New Orleans still required the building to be raised to a new base floor height, plus 1 foot. This meant that the first-floor slab would need to be about 3 feet above the current road. These constraints did not work for Safeguard’s plans to get customers into the building to park and load/unload. So, the team designed the building to be flood proof at the first 4 feet of the building height. To accomplish this, SBS had to install a water proof membrane barrier under the slab and up the walls 4 feet high. Flood planks were used to flood-proof the doors, store front and the two 20-foot-wide high-speed loading and parking doors. This all came at a cost to the project of approximately $550,000.

The city of New Orleans has also tasked new projects for ways to contain more of the rain water from leaving the sites and slow down the rain water runoff by use of underground storage tanks, catch containers, etc. Safeguard abided by the City’s requirements and designed this self-storage facility with a green roof, which is one of a very few in New Orleans. The building roof is approximately 22,475 sf with an 11,000-sf green roof.

The structure was designed on a 10’ x 10’ grid system with structural steel, with the Janus partition system finishing out the storage units. The first floor has an area that has “upper” storage units, these are 5×5 units on top of 10×10 units. The customers get access into these units by mean of a rolling ladder (similar to what you see employees using at hardware stores).

Mid way during the Janus installation of units, Safeguard decided to add the Janus NOKE system, which is an app-based entry system to the storage units. Safeguard opted for more than just unit access, they wanted the NOKE system for access into the building (the 20’x14’ high speed doors), the elevator, the sliding door, the restrooms and the fire rated door between the loading area and the parking area.

During the project, Safeguard adopted a new office layout corporate wide, and the Erato project was the first one to get the new design. We worked through their modifications and made changes up to the end when they occupied the office.

Next door to the site, is an existing 5-story Safeguard building, we had to incorporate all of their cameras, fire alarm, burglar alarm, PA system, elevator monitoring, etc. into the new Erato building. This was done by running two 3” conduits almost 400 feet from one building to the other, going through fire walls, two different exterior building walls and on top of occupied units in the old building.

Despite the numerous challenges, SBS Construction delivered a successful and sustainable self-storage building to a happy client. For more information on our past projects, please visit us at www.SBSWorld.net

SBS Construction can turn your project into a practical and profitable reality.